Create an Account - Increase your productivity, customize your experience, and engage in information you care about.

Mr. Duvall was a simple man who lived simply. James happened to be the one who sold the property to the Cherry Valley Town Site Company. Thus it was he for whom the town was named, even though his brother arrived in the area 10 or so years before. His idea was to log off the hills of the area and live with his brother. When James arrived, he acquired the land from the riverbank up to the hillside extending 1 mile east of what was known as the Pole Line Road, which is now 275th Avenue NE. James had his logging camp located on the southwest corner of what is now 3rd Avenue and Bruett Road, which is the road to Cedarcrest High School.

His first job was to clear off enough of the woods in order to setup a skid road for transporting the logs to the river. He managed to buy some black bulls to move the logs out of the woods. In his first years James did not have his family living with him, but once the cabin became habitable, he brought his wife, named Annie, and their several children to live with him. At this time there were no stores or supply firms in town. Postal service was erratic and mail was usually held in Monroe for someone to pickup when he / she went to that little crossroads - which wasn't even named yet. 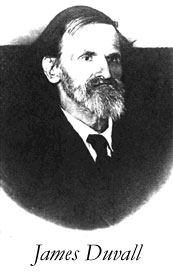 After the Town of Duvall was established, James did return to see what had been done and visit the people he knew. Though he was amazed by the changes, he was never overawed by the fact that the town was named for him. It was his land originally - why not?